You Could Use a Guinness Right About Now!

Maintaining A Human Touch In The Digital Era

It's often said that life imitates art and there are two scenes in Steven Spielberg’s 2002 film Minority Report that have become particularly prophetic in the marketing world.

In one, John Anderton (Tom Cruise) walks through a busy commuter area and is bombarded by advertising tailored to him. The holographic adverts scan his retinas and call out customised messages such as “John Anderton! You could use a Guinness right about now!” In the other, he enters a Gap store and is greeted by a hologram that remembers his (or rather the person’s eyes he is using) previous purchases and buying preferences. Intrusive? Yes. Scary? A little. But it’s also the kind of thing that makes marketers salivate.

Today, we are closer than ever to the advertising ecosystem that Minority Report predicted. Digital technology has heralded the age of individualisation and given marketers the ability to target individual consumers directly.

Browsing Facebook, potential customers are met with dynamic ads, which change depending on sites they have previously visited. In the real world, companies are experimenting with more advanced ways to target consumers, too. For example, last year The Guardian reported that 59% of UK fashion retailers use some kind of facial recognition to track shoppers. Others use beacons to send customers location-specific deals, discounts, recommendations and rewards to their phones while they browse in store.

So what are some advantages from a marketing perspective?

There is a fine line between providing a highly personalised, relevant service and making customers uncomfortable about potential invasions of privacy……something we might call the “creepy factor”.

In 2012, Pulitzer prize-winning reporter Charles Duhigg wrote an investigative report for the New York Times on how the department store chain Target learned about its customers. Duhigg spoke with a former Target statistician who was tasked with discovering when women were in their second trimester of pregnancy. The idea was that if Target could start marketing to these women before they gave birth, it would capture valuable new customers since new mothers tend to buy a lot of stuff.

Duhigg was told that Target had been amassing the personal data of shoppers for decades. Whenever possible, Target assigns each shopper a unique code that is linked to vast amounts of demographic information and brand preferences. On top of that, the psychological theory of “cue-routine-reward loops” is used to predict what customers want before they want it. It all sounds very Minority Report, right?

About a year after creating the “pregnancy prediction model”, a man came to Target, angry because his teenage daughter had received marketing material for maternity products. As it turned out, the teen later admitted to her father that she was, in fact, pregnant, but many would see this as personalisation gone too far. As a footnote, Target refused to speak with Duhigg or comment on the accuracy of his report but maintained that it was in compliance with all federal and state laws.

The level of targeting seen in Minority Report is seen as the Holy Grail of marketers looking to get their messages to the right people. However, we would do well to remember that the future depicted in that movie is a dystopian one. While digital tools offer numerous sales and marketing benefits, companies still need to figure out how to blend the human touch with the emerging capabilities of machine intelligence.

I hosted a webinar last year with one of our technology partners, Verint Systems, which looked at how businesses can find the right balance between digital and human customer service. In summing up, we offered six practical tips for improving the customer journey and retaining the human touch in the digital era: 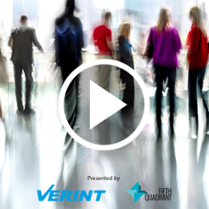 Steve is the Head of CX Research and has expertise across a variety of industries including; automotive, finance, banking, retail... Contact our team for details on workshops and roundtables delivered by Dr. Steve Nuttall